Blueprint for future of the railway 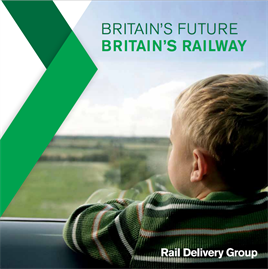 The Rail Delivery Group has published its blueprint for the future of the railway.

Britain’s Future, Britain’s Railway explains the role that the railway plays in people’s lives - taking people to work or moving half the fuel needed for the country’s power stations, for example.

The RDG says that the number of trains running has increased by over a quarter since the late 1990s, and that 1.4 billion punctual journeys are now made each year.

It sees HS2 as benefiting two-thirds of passengers travelling between major cities, while new on-board signalling will allow trains to run closer together. The planned ‘electric spine’ is also mentioned, linking South Coast ports with the East Midlands and South Yorkshire.