VIDEO: Dawlish - a year on 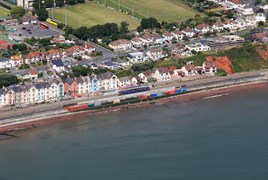 On the first anniversary of the storm that tore a hole in the sea wall at Dawlish, Network Rail has released time-lapse footage of the extensive work undertaken to restore the south west’s rail connections.

Very strong winds and high seas on the night of February 4/5 severely damaged the railway line, causing a section of it to be washed away, along with part of the sea wall, the platforms at Dawlish station and sections of the coastal path.

NR’s 300-strong ‘orange army’ arrived on site to find 80 metres of track engulfed by the sea and a work site extending over three miles from Dawlish Warren to Teignmouth. The team worked day and night, and around the tides to ensure that the line and its surrounding area was repaired as quickly as possible. The line reopened on April 4 2014, two weeks ahead of schedule.