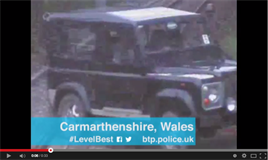 British Transport Police has released footage of a Land Rover crossing a railway line in Wales just as a train reaches the level crossing.

The vehicle and train (a Swansea-Shrewsbury service) made contact, but there were no reported injuries. The incident happened in August 2014 near Llandeilo (west Wales) and the driver of the car was later ordered to pay £500 in compensation and £85 in costs.

The video has been released as part of Operation Look, a BTP campaign to raise awareness of level crossing misuse.

Between April 1 2014 and January 1 2015, 400 drivers were charged or summonsed for crossing misuse, a further 357 received fixed penalty notices, 16 were cautioned, and 568 were sent on driver awareness courses. BTP officers dealt with drivers from the ages of 17 right through to 90.