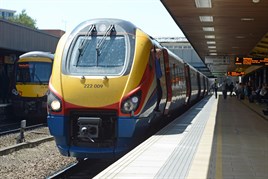 NR says there is a “value for money case” for lengthening trains between Birmingham and Stansted Airport/Cambridge via Leicester, Norwich to Liverpool via Nottingham and Sheffield, Southampton/Reading to Newcastle via Derby, and Plymouth to Edinburgh/Glasgow via Derby.

The study also examines upgrading Wigston Junction to Syston Junction to four tracks with separation of the Midland Main Line and Nuneaton routes at Wigston Junction, provision of two extra platforms at Leicester, and better facilities at Bedford to increase the number of trains able to operate at the station.

Signalling upgrades between Syston Junction and Peterborough are being considered, as is extension of the East West Rail Link from Bedford to Cambridge.

Consultation on the study closes on April 28. It can be found on the NR website.