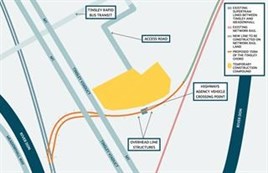 Network Rail has unveiled its planned route for a 150-metre chord linking the heavy rail and Sheffield Supertram networks. The chord will be used by tram-trains running between the two systems.

Warrick Dent, area director for Network Rail, said: “Even though the tram-trains run elsewhere, we have had many complex issues to work through with our partners in the project, to make sure that the vehicles can operate safely in Britain without causing unnecessary disruption to regular tram and rail passengers.”

Consultation events are being held at The Skills Source Academy in Sheffield on February 6/7.

Tram-trains will provide a direct service and improve journeys between Sheffield city centre, Rotherham Central and Parkgate retail park. They will use the existing Supertram route between Cathedral and Meadowhall South and then run onto the rail network via the new chord to Parkgate.

An application for a Transport and Works Act Order (TWAO) will be submitted to the Secretary of State for Transport in spring 2015, and there will be a further public consultation as part of this process. Dependent upon the TWAO process and decision, work to construct the chord is expected to start in spring 2016.

Vossloh is building the tram-trains, with delivery due later this year.

Network Rail has commended its latest Christmas and New Year engineering period as a great success,

A warning that shortfalls in track inspection could be far more widespread than just those that led to a derailment at Sheffield on November 11 2020.