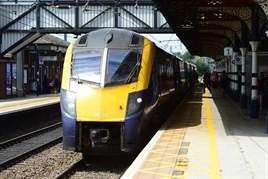 Open access operator First Hull Trains enjoyed a record year in 2014, with passenger numbers rising by 6.7%. The company has also confirmed that it has secured a three-year extension to its Track Access Contract, which now expires in December 2019 (RAIL 764).

“During the past few years, First Hull Trains has invested around £5 million in its fleet and taken the maintenance of its fleet in-house, which has helped improve reliability and sustainability,” said managing director Will Dunnett.

In 2014 (the 52 weeks to January 3 2015), FHT recorded punctuality of 87.1% (trains arriving within ten minutes of schedule), 60.2% of its services arrived within 59 seconds of scheduled time, and 5.5% were subject to Cancellation and Significant Lateness (CaSL).

“West Midlands Trains has failed to fulfil its obligations – to its franchise agreement and, most importantly, to its passengers" - Grant Shapps

NATIONAL RAIL CONFERENCE EXCLUSIVE: Rail industry will be judged on “ability to adapt” to Williams - Haines