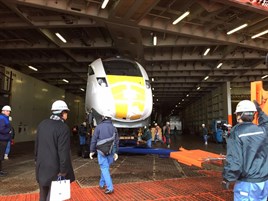 The first of Britain’s new generation of high-tech passenger trains began its journey from Japan to the UK on January 22.
Train 1, the pre-production Class 800 nine-car train, has been designed and built by Hitachi for the government’s £5.7 billion InterCity Express Programme (IEP). It was loaded on to a container at Kobe port in Japan, having left the Hitachi Kasado works on January 7, sailing around the coast of Japan to mark the official send-off. The new train is expected to arrive at Southampton Docks in March.
A total of 866 Class 800/Class 801 carriages will be manufactured, mostly at the Hitachi Rail Newton Aycliffe factory, although the first 12 trains are being built in Japan to meet deadlines.
After its arrival in the UK, the train will be used to run a host of tests to get the fleet ready for service in 2017. The new fleet will replace the 40 year-old HST fleet as well as Class 91/Mark 4 sets on the Great Western and East Coast Main Lines, bringing faster services and additional capacity between London Paddington and Reading, Bristol, Cardiff and Swansea as well as between London King’s Cross and Leeds, Newcastle and Edinburgh on the East Coast Main Line.