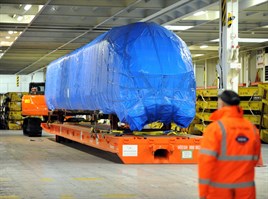 The part-assembled vehicle will be used for training, although initially it will be stored at the Höegh Northern Terminal at Port of Tyne until it is moved to the training facility. No date has been set for the move.

Built at Kasado in Japan, the carriage was transported from Kobe. Its journey took 52 days and it travelled 12,880 nautical miles.

Darren Cumner, manufacturing plant manager at Hitachi Rail Europe, said: “Apprentices, technicians and engineers will use this train carriage to gain in-depth knowledge of how to build trains.”