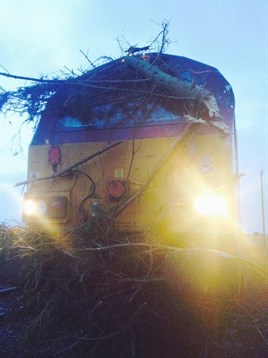 Services in Scotland have been affected for the second time in two weeks because of severe weather conditions.

Services are due to be withdrawn this evening (January 14) from 1800 owing to predicted 100mph winds and snow in the West Highlands/Central Belt. Withdrawn services included: Kyle-Dingwall; Kilwinning-Ardrossan/Largs; Dumbarton Central-Helensburgh Central; Glasgow-Oban/Fort William/Mallaig lines.

This follows disruption to services on January 9-10 because of strong winds. On January 8, Network Rail decided to withdraw some services for the following day as a safety precaution against predicted strong winds. These were Inverness-Kyle/Thurso/Wick/Aberdeen, Kilwinning-Ardrossan/Largs, Dumbarton Central-Helensburgh Central, Glasgow-Oban/Fort William/Mallaig.

Overnight, the winds became more severe and widespread than estimated, leading to NR cancelling all ScotRail services from the start of service on January 9 until lines could be checked and verified as safe, allowing them to slowly be introduced throughout the day.

Extensive damage and disruption was caused on the network well into January 10:

Further services were withdrawn on January 10 as a result of the damage.