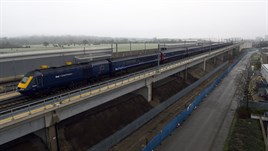 The first passenger train has passed over the new Reading Viaduct. The 2,000-metre structure cost £100 million and removes a major bottleneck on the Great Western Main Line, allowing trains to move in and out of Reading without impeding each other. It is a problem that has existed since Brunel first designed the layout in the 1840s.

The viaduct is part of an overall £895 million Reading Redevelopment project, which began in 2008 and is being implemented in parts. The new-look station, boasting five extra platforms, was officially opened by HRH The Queen in July 2014. The overall project is due for completion in the summer.

Drone footage of the first passenger train to cross the viaduct:

Piling work has begun on one of HS2’s most spectacular engineering features yet - the low 500-yard, nine-span Wendover Dean Viaduct in Buckinghamshire.