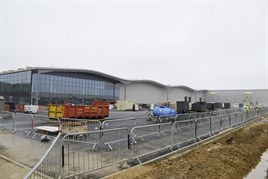 The topping-out of the new train factory at Newton Aycliffe, in County Durham, was marked on October 30 - and it is now less than a year to go before the factory is due to be handed over to its owner, Hitachi.

The £82 million factory, which will employ 730 people in the construction of IEP units for the East Coast and Great Western Main Lines, plus up to 80 AT200 EMUs for ScotRail, is due to be completed by mid-2015.

With the structure of the building complete, including the newly laid floor complete with tramlines, and with gantry cranes already in place, work can now concentrate on fitting out the interior.

RAIL’s glimpse behind the scenes of the enormous facility, which Hitachi says can be expanded even further if necessary, took place on the same day that Hitachi Rail Europe Managing Director Keith Jordan announced that the company would be establishing its design office at the Newton Aycliffe factory.

Four people are currently working from an office facility in nearby Newton Aycliffe. The site will eventually house 12 design staff, recruitment for which has already begun. Once the factory is complete and handed over, the design office will relocate there.

With the design of IEP already signed off, the design team will be tasked with interior design work for the AT200 model, with an order for ScotRail already confirmed. Hitachi says that the future size and scope of the design office will depend on future workload.

“This is no longer just a concept - everybody can see for themselves the sheer scale of the site that will act as the hub for our rail manufacturing work in the UK and across Europe,” said Jordan.

“With the establishment of our design division, we further enhance professional opportunities and our commitment here in Newton Aycliffe and the northeast of England. This will be our UK and European rail centre, where we design and build trains for Great Britain and the rest of Europe.”

Local MP Phil Wilson (Sedgefield) praised the construction as an “iconic building for all kinds of reasons”.

Noting the area’s past in the development of the railways, Wilson said train building was returning “full circle to this part of County Durham”.