“HS2: plan ahead with confidence” - Perry 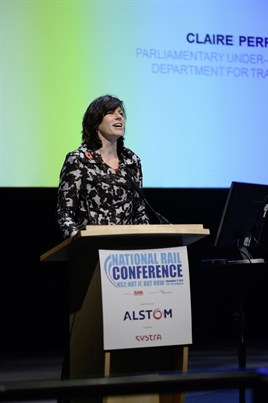 “The debate has moved on from whether to build HS2, to how we should build it,” Transport Minister Claire Perry asserted at RAIL’s National Rail Conference at Birmingham’s International Convention Centre on November 5.

Echoing the title of the conference - HS2: Not If, But How - Perry told delegates: “Plan ahead with confidence. Be ambitious with this project, because HS2 will be built - both phases on time, and on budget.

“And the reason that we can be so confident about that is this is not just another transport scheme for Britain, it’s part of a broader promise we’ve made to the country. We promised to get our economy motoring again, to get people working again with the dignity and security a pay packet brings to a family, and to get transport fundamentally where it should be, which is a driver of economic growth.”

Perry said that transport is a “mandatory, not optional, investment if you believe that Britain’s best economic days are ahead”. She explained that the Government is changing the way it thinks about infrastructure and transport in response to that belief, and that schemes such as HS2 are part of that change.

To achieve that aim, she said it is important to engage with “a group who sometimes feel that they’ve come last in railway thinking in recent years, and by that I mean the passengers”.

She continued: “HS2 is the first north-south railway in this country since Queen Victoria was on the throne. That actually gives us a clean slate to think about how we put passengers at the very centre of everything we do - whether it’s timetables, rolling stock designs, station facilities, marketing, ticketing, social media, or linking to other transport, not getting off this wonderful high-speed train and finding yourself chugging across the north of England in struggling Pacer trains.

“With HS2 we are starting afresh. And that will reflect, I hope, on the rest of the railway, which I don’t think sometimes is delivering quite what we could be doing today.”

However, Perry was keen to emphasise that HS2 is not the only project the rail industry should be thinking about.

“HS2 is the start, but it is most certainly not the end. We’re really ambitious about the scales and change for Britain’s railways, starting with HS2, spreading out right across the other lines.

“An industry should be ambitious. We want to get going on this hugely exciting venture - a railway that won’t just be fast, wonderful to travel on, stunningly designed, and makes its passengers happy, but will be an absolutely fundamental engine for growth to drag growth out of the South East right across this country, a real catalyst for change.

“But let’s make a catalyst of change as well for our passengers, let’s make it a chance to make all of us proud of our great British railway.”

Perry finished her address by thanking the industry for its support and conviction, “because without that I think this project would still potentially be sitting in the sidings”