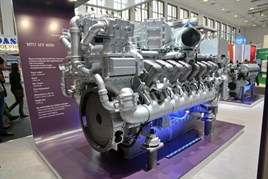 The EU’s Stage IIIB rules take final effect from January 2015 and freight industry leaders have raised concerns that locomotives with the new power units have yet to be developed; the Vossloh Class 88 electro-diesel is the only one currently on the market (RAIL 754).

One of the main areas of concern expressed has been accommodating large IIIB-compliant diesel engines within the confines of a UK loading gauge locomotive. However, MTU, which exhibited its 16V 4000 power unit at InnoTrans in Berlin in September (RAIL 758/759), has told RAIL: “It is generally conceivable to equip locomotives that run on tracks in UK with MTU engines which meet the emission standards of EU Stage IIIB.”

MTU spokesman Rolf Behrens also told RAIL that while the initial costs of IIIB-compliant engines would be higher, the total life cost of the engines was expected to be no greater than those built to the earlier rules.

“This extended scope of supply has an influence in the double digit percent range on the total acquisition price. However, no increase in total cost of ownership is to be expected for the rail operator, given a typical load profile and utilisation period, due to the engines’ improved fuel efficiency compared to Stage IIIA engines.”

Behrens said, however, that whether IIIB engines could be used to ‘retro-fit’ existing designs would depend on “detailed information about the locomotive classes in question.”

Since August the Friedrichshafen (Germany)-based MTU has been wholly owned by Rolls-Royce, which was previously joint owner with Daimler.

DRS considering re-engineering possibilities for its diesels, with even '68s' being considered