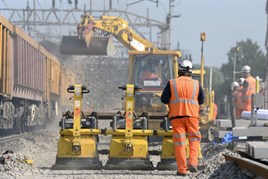 The West Coast Main Line will be closed or only able to run very limited services on three separate occasions this month, because of a series of blockades at Watford Junction to allow resignalling and track relaying, as part of an £80 million project.

Network Rail had originally planned a 16-day closure in August 2014 and a nine-day closure in February. But the possession strategy has been considerably revised after stakeholder feedback, and now includes eight weekend and Bank Holiday closures that will result in less disruption for passengers. A previous closure took place over the May Day Bank Holiday.

Although not all the required work will take place during August, all signalling between Kings Langley and Bushey will be renewed, with new five/six-track signalling gantries installed in places.

Resignalling contractor Siemens will upgrade power supply systems, and meet the challenge of assembling the structures in sections on site, before craning them under overhead wires.

Modifications will be made to the overhead line equipment to make it more reliable, while the life-expired Orphanage Road bridge, close to the end of the station platforms at Watford Junction, will be replaced to enable future line speeds of 125mph. Nearly ten miles of new track will also be laid.

Even though the work will take place during a month that is traditionally considered quieter for commuting, train operators London Midland and Virgin Trains are encouraging passengers to use alternative routes.

VT is encouraging London-Scotland passengers to use East Coast, while passengers for the Midlands and the north of England are asked to take Chiltern Railways trains from London Marylebone or East Midlands Trains from St Pancras.

London Midland will be running trains as far south as Hemel Hempstead (with rail replacement buses filling in the gap between there and Stanmore on London Underground’s Jubilee Line), but the operator’s Head of West Coast Services Terry Oliver advised passengers to use an alternative train route “where possible”. LM has arranged for its tickets to be accepted by selected operators to allow passengers to do this.

The Watford Junction-St Albans Abbey Line will be closed completely between August 9-26, with replacement buses provided. Meanwhile Milton Keynes-South Croydon trains operated by Southern will only run as far as Shepherds Bush for part of the duration of the work.

Jim Syddall, acting managing director of the Network Rail London North Western Route, said: “The section of track at Watford is one of the most intensively used, high-speed pieces of railway in Britain, and has seen tremendous growth in traffic and passengers over the past five years.

“There is never a good time to close the railway, and we apologise for the inconvenience caused, but this work is essential to maintain reliable train services for the millions of passengers who travel on this route every year.”

Further blockades will take place between December 24-29 (when the signalling system is commissioned and control transfers from Watford Junction Power Signal Box to Wembley Mainline Signalling Control Centre), and on February 14-16, 21-23 and April 3-7 (when the Orphanage Road bridge decking will be replaced).