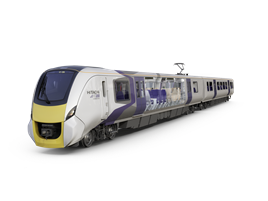 New train fleets built by Hitachi in the UK could be in traffic by the end of 2015.

Mock-ups of the Japanese manufacturer’s AT100 Metrotrain and AT200 commuter train were unveiled on July 21, and inspected by senior officials from train operators and rolling stock leasing companies.

The AT100 is the Metro offering, while the AT200 is the longer-distance version. They are electric multiple units, and can be offered as either 25kV AC overhead or 750V DC trains. Hitachi says a dual-voltage design is possible.

Hitachi Rail Europe Production Director Jon Veitch told RAIL that a three-car AT200 will be constructed in Japan and brought to the UK for testing. It will arrive next year, and it is planned that train operating companies will be able to use it for evaluation.

And Hitachi has confirmed it is exploring several markets for the trains. Potential orders for c2c, London Overground (LOROL), TransPennine Express and the new ScotRail franchises have been mentioned, while it has already been shortlisted for LOROL.

Standardised design is seen as a benefit for the trains - Hitachi believes that fitting the same Dellner coupling to all AT100 and AT200 designs offers better flexibility for the fleets, and enables operators to use both trains.

A range of interiors is available for the AT200, depending upon operator requirements. The seats are cantilevered, allowing more space for luggage.

AT200 is a new, modular, electric suburban product. It has been designed following consultation with TOCs and stakeholders, and includes inter-vehicle gangways, tables and toilets, ambient LED lighting, air-conditioning, USB and power sockets at every seat, and WiFi provision. It has what Hitachi describes as “adequate luggage storage” for commuters and cantilever seats in both First and Standard Class.

Trains will be fitted with high-level diagnostics that continuously monitor performance and feed the data back to the depot.