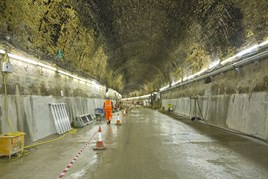 Crossrail trains across London will be run by MTR Corporation, Transport for London announced on July 18.

The £1.4 billion contract will run for eight years with an option to extend to ten, and covers the route from Reading and Heathrow Airport to the west of the capital to Shenfield and Abbey Wood in the east.

The concession will begin on May 31 2015, initially taking over the Liverpool Street-Shenfield route currently operated by Abellio Greater Anglia, and using existing Class 315 trains.

On the same day, TfL (in the form of current London Overground operator LOROL) takes over the West Anglia routes from Liverpool Street to Cheshunt/Chingford.

The decision to award the concession to MTR is a further boost for the Hong Kong company, which has run LOROL since 2007 alongside Deutsche Bahn-owned Arriva Trains UK.

MTR pipped three other pre-qualified bidders for the rights to operate Crossrail - Arriva, National Express and Keolis/Go-Ahead. The company says it expects to employ around 1,100 staff with up to 850 new posts, including almost 400 drivers and more than 50 apprenticeships for people living along the route.

MTR Crossrail will also provide support for testing and commissioning activities for the new railway, managing system interfaces across the wider project through an integrated role working with TfL, Network Rail, Crossrail Ltd, Bombardier (which will build the new Crossrail trains) and other train operators.

London Underground and London Rail Managing Director Mike Brown said: “Appointing an operator is a huge step towards the new railway coming to London. The decision to appoint MTR was reached after a thorough and competitive procurement process, and we look forward to working with them to transform rail services in the capital.

“Crossrail will help cut journey times, make it easier for people travelling across the city, and create jobs and support growth and regeneration along the route.

“As our population grows faster than any other European city, the case for stable and sustained investment in London’s transport network has never been stronger.”

“Over the past seven years, we have developed a strong partnership and collaborative working relationship with TfL and Network Rail through our joint venture operations of London Overground,” he said.

London Mayor Boris Johnson said: “As hardworking engineers beaver away underneath our feet on the final construction of Crossrail’s tunnels, we are putting the final pieces of the jigsaw puzzle together above ground.

“I am delighted that we can now announce the new operator of this landmark railway, bringing it one step closer to welcoming passengers aboard. Crossrail will revolutionise east-west transit in the capital.”