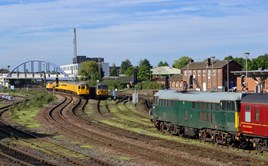 Network Rail is planning a 79-day programme of work at Derby as part of a £200 million track and signalling upgrade in the area.

While the station was modernised in 2013, the track layout has not been altered in almost half a century and is nearing life-expiry. NR has worked with CrossCountry and East Midlands Trains (which both serve Derby station) regarding the work, which begins on July 22 2018.

“It is many decades since the rail infrastructure at Derby had this kind of investment,” said Network Rail’s London North Eastern and East Midlands Route Managing Director Rob McIntosh.

“Derby is a key interchange on the Midland Main Line, and once the upgrade is complete and the bottleneck removed, the region will benefit from a more efficient, reliable and modern network fit to meet the needs of the economies and communities our railway serves.”

NR said that the track layout of the station is also inefficient, with trains enduring lengthy waits for paths into the station, causing bottlenecks.

A detailed timetable will be published in the New Year, but it will affect EMT trains to London, Crewe, Matlock and Nottingham, with XC diverting away from Derby. A bus replacement will be provided.

“This work is vital to deliver an upgraded railway in Derby, and we are supportive of the plans in place by Network Rail,” said EMT Managing Director Jake Kelly.

CrossCountry MD Andy Cooper said: “The railway layout at Derby was great in the ‘days of steam trains’ but does not meet the needs of today’s much busier railway.”