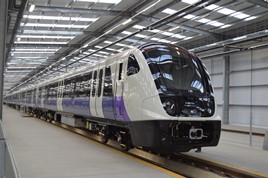 An additional £1.4 billion of funding has been secured for Crossrail, but new Chief Executive Mark Wild says the revised autumn 2019 opening date will not now be met - and only when a “robust and deliverable schedule” has been established will one be announced.

In a statement issued by Transport for London, Wild said: “Since I joined Crossrail Ltd in November, I have been reviewing the work still required to complete the core stations and rail infrastructure, and begin the critical safety testing.

“It is evident that there is a huge amount still to do. Stations are in varying stages of completion, and we need time to test the complex railway systems. This means that I cannot at this stage commit to an autumn 2019 opening date.”

The Bombardier Class 345 electric multiple units, which are being funded by TfL, have also to be fully tested and certified for the central section of the route, which uses metro-style communications-based train control signalling.

The additional funding has been secured by the Mayor of London, Greater London Authority (GLA) and TfL.

The GLA will borrow up to £1.3bn from the Department for Transport (DfT), and will repay the loan from the existing Business Rate Supplement and Mayoral Community Infrastructure Levy. The DfT and TfL contributed £300 million in July 2018. In addition, the GLA will also provide a £100m cash contribution.

It follows the emerging findings of the KPMG review into Crossrail Ltd’s finances, which indicates that the likely capital cost impact of the delay to the project (announced in August this year, RAIL 861) could be between £1.6bn and £2bn. After the earlier £300m cash injection, this leaves between £1.3bn and £1.7bn to complete the project.

With final costs of Crossrail still to be confirmed, a contingency arrangement of up to £750m has been agreed between TfL and the Government in the form of a loan facility. The combined financing deal replaces the £350m interim financing package offered by the Government in October.