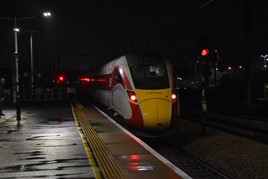 Two studies into the spread of COVID-19 on railways have found that the chance of contracting the disease by travelling on a train is extremely low.

The RSSB (formerly the Rail Safety and Standards Board) estimates that the risk of infection per passenger journey is only 1-in-11,000 journeys.

The modelling is based on a Hitachi Class 800 carriage used by LNER, loading 44 passengers travelling for 30 minutes, with 22 passengers alighting and replaced by another 22, then travelling for a further 30 minutes. The figure does not include any mitigating effect of wearing face coverings.

Meanwhile, a German study has found “little or no evidence” that the disease has been triggered by a train journey.

The research for German train operator Deutsche Bahn concluded: “We see remarkably few infections in trains. No infections occurred in persons on board with a stay of less than ten hours. Not a single contact tracing has been identified in Germany and Austria as having been triggered by an infection on the train journey.”

It also found that the infection rate in air-conditioned carriages was lower than in vehicles without air-conditioning. It reported: “The air flow is essentially vertical rather than horizontal, which makes direct distribution of the virus by the airflow rather unlikely.”