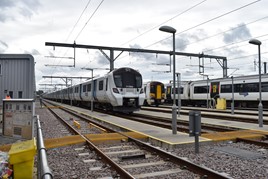 What is believed to be the biggest fleet cascade in the privatisation era was completed by Govia Thameslink Railway on September 30, when it withdrew its final Class 313s on the Great Northern network.

The £2 billion programme began in 2014 (when GTR replaced First Capital Connect) with the introduction of Bombardier Class 387/1s. It has finished with the 42-year-old ‘313’ electric multiple units being replaced by 25 six-car Siemens Class 717s, with the final new EMUs entering traffic at the same time as the ‘313s’ were retired.

It means that GTR has introduced 1,526 new and cascaded vehicles since the start of its franchise, and released 880. This has given an overall fleet increase of some 646 vehicles, with the average age of the fleet dropping from 20.4 years to 12.5 years.

“Today is a landmark moment for both GTR and its passengers, as we continue to deliver on the industry’s hugely ambitious modernisation programme for our network,” said GTR Chief Operating Officer Steve White.

He added that the extra capacity has enabled GTR to increase its passenger volume from 318.8 million to 341.5 million in 2018-19, compared with the year before.

Secretary of State for Transport Grant Shapps said: “The introduction of new carriages has been one of the biggest upgrades since the privatisation of our railways, replacing one of the UK’s oldest fleets.”