Among the 239 exhibitors, 179 collectively displayed upwards of £0.5 billion of rail plant, demonstrating the breadth of the industry’s capability and innovation.

Secretary of State for Transport Chris Grayling visited the event on June 21, to learn more about the battery, bi-mode and hydrogen technology on display and to greet some of the many members of the rail supply chain on-site.

“As we invest in the most significant upgrade of the UK rail network since Victorian times, it is vital we make use of the expertise and innovation that the industry has to offer,” Grayling said.

“Rail Live showcased the very best of the UK’s thriving rail industry, and it was fantastic to see so many exhibitors and visitors at this year’s event.”

Grayling also witnessed one of the British Transport Police live demonstrations, which featured a firearms and dogs unit collaboration, a protestor removal team and a policing at heights team across the two days. More than 30 BTP officers were on-site to give demonstrations and speak to visitors about the important role of the railway’s own specialist police force.

Mike Noakes, Head of Rail, Department for Business, Energy & Industrial Strategy, said: “Rail Live this year took a step on from being a great working display of kit to being a truly notable event for all people with a professional rail interest, not only those involved with rail plant and track working.

“Having RAIL take over the organisation and promotion of the show has made it possible for Rail Live to become a ‘Farnborough for the Railway’, and an event that is now well and truly in the international rail calendar.”

Network Rail Chief Executive Mark Carne visited Rail Live on June 20 (he spoke at the National Rail Convention, see pages 14-15) and toured the site, speaking to exhibitors - many of whom are NR’s clients. He told RAIL: “I was really impressed at the technology and innovations on display. And it was great to see NR people ‘shopping around’ for new ideas to help them deliver greater efficiency.”

NR Programme Director, Track, Steve Featherstone, who has been integral to the development of the plant display at Rail Live over the years, said: “The first Rail Live was in the car park at Westwood with about £40,000 of kit on show.

“Nowadays we have about £0.5 billion of kit on show. Rail Live is where the people with solutions get together with the people with problems, which all adds value to Network Rail as the client.”

Having been successfully run by Rail Alliance at QRTC for the past five years, primarily as a plant show, this year RAIL took ownership of the event (in association with Rail Alliance), with the aim of developing it further into a major business event for the UK rail industry.

Rail Alliance Chairman Colin Flack said: “This show just keeps getting better - we now have the perfect partner in RAIL and are already brimming with ideas for Rail Live 2019.

“It was so good to see so many old friends back and welcome some new… the quality of exhibitor displays was the best we have seen and the exhibition structure, along with the presence of so much rolling stock, gave us a whole new dimension. The combination of RAIL, QRTC and Rail Alliance is a powerful one: the railway is an intrinsically equipment-orientated, outdoor sport - we saw it in all its glory at Rail Live 2018.”

The QRTC site at Long Marston is unique - it is the largest and most extensive rail storage facility in the UK, comprising some 20km of storage sidings and connected to the national network at Honeybourne. There is enough space for approximately 1,000 items of rolling stock.

QRTC Chief Executive Ruth Dunmore said: “This show has moved from good to great. As a company we are so proud of the part that our team play in its delivery and of the fact that we are the ‘Home of Rail Live’. 2018 was the best show yet! It was great to welcome the entire industry to our home in Warwickshire and to see so many satisfied exhibitors and visitors… roll on next year!” 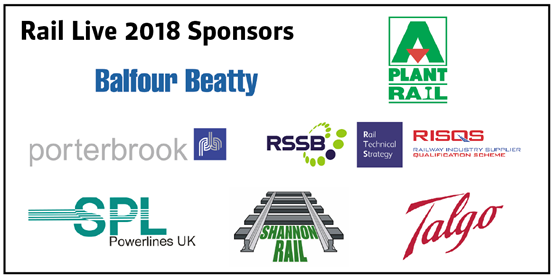