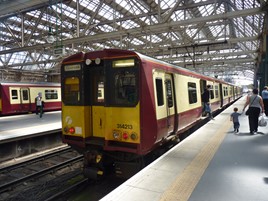 Withdrawals of Class 314 electric multiple units is dependent upon the arrival of cascaded stock to replace it, ScotRail confirmed on February 13.

The three-car EMUs date from 1979-80, and are used on suburban trains from Glasgow Central to Newton, Neilston and Paisley Canal as well as on the Cathcart Circle. The veteran EMUs also serve Wemyss Bay.

They are Standard-only trains, and have recently undergone refurbishment. Seven sets (314203/204/208/209/211/212/214) carry Scotland’s Railways livery. They are all based at Glasgow Shields Road, and have always operated in the Strathclyde area.

An Angel Trains spokesman told RAIL that the ‘314s’ are destined to be sent for scrap as soon as they are withdrawn, although any attempts to save vehicles for preservation will be considered.