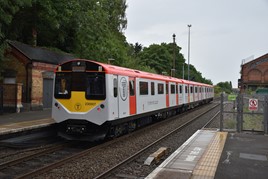 Vivarail Chairman and Chief Executive Adrian Shooter has told RAIL that a high proportion of the company’s ex-London Underground District Line stock could be destined for a life overseas.

Some 200 40-year-old D-Stock vehicles are currently stored at Vivarail’s base at Long Marston, awaiting conversion to diesel, electric, battery or hybrid-powered trains on the main line network.

The company has so far delivered three two-car diesel units to London Northwestern Railway for use on the Marston Vale Line, and has substantially completed an order for five three-car diesel/hybrid trains for Transport for Wales.

Shooter says the company is unlikely to fulfil any more orders for diesel variants of the D-Train, but continues to develop its battery offering that uses fast charging technology. It is also considering building a D-Train powered using hydrogen fuel cells.

Shooter told RAIL: “We are at the moment putting together a bid for an operator - not in this country - where the routes would be up to 500 miles long, to be provided totally with battery trains using this device.

“This bid we are putting together contemplates trains that are running for several hours - 60 to 70 miles between charging stations, but possibly going twice that far in emergency if the charging station should go down.”