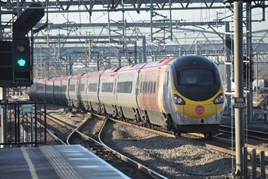 Virgin Trains has launched its Traindeer Pendolino, 390112, following a competition, won by sisters Ella and Ruby Prior from Congleton, Cheshire. The ‘390’s’ livery was inspired by the girls’ design for a Christmas card. The ‘390’ has been given a full festive treatment, complete with a red nose, and was unveiled at Manchester Piccadilly. The girls were unaware that their design had been applied to the train, and only found out at Manchester when Father Christmas stepped off the train to greet them. Ruby Prior, said: “Wow I can’t believe it! I thought it was a dream. To find out our train will be taking people all over the country? And it’s ours. Wow.” The livery will stay on the ‘390’ until January 9. The winning Christmas cards are on sale at Stockport, Macclesfield, Stoke on Trent, Stafford, Crewe, Liverpool and Runcorn, Lancaster, Manchester Piccadilly train from £2 and all proceeds will be donated to the Riff Raff charity, which aims to raise funds for local charitable causes and organisations in the Urmston area.