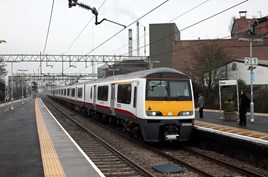 The first refurbished Class 321 Renatus was unveiled on December 16, at various visiting stations that the electric multiple units will serve between now and 2021 (when they are sent off-lease).

The 100mph EMUs being refurbished are operated by Greater Anglia. First to be treated was 321303, while the EMU used for the launch was 321304. It was unveiled at London Liverpool Street before running to Southend Victoria, Shenfield, Colchester and Ipswich.

Thirty four-car EMUs will be refurbished by Wabtec Faiveley UK at Doncaster Works. The deal was signed in 2015, with the first unit delivered last year.