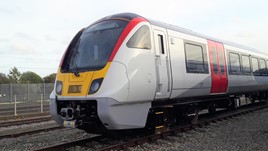 One hundred Class 720 Aventra vehicles have now been completed at Derby Litchurch Lane, and manufacturer Bombardier has released two five-car sets for testing at Old Dalby (720501 and 720503).

However, Greater Anglia is still unable to confirm when the electric multiple units will begin to operate passenger services, with the trains set to be at least a year late (RAIL 889).

The first five-car had been due at Ilford last January, for testing ahead of a March introduction.

But as this issue of RAIL went to press, a Class 720 had yet to be moved on the national network, with the two at Old Dalby having been transferred by road.