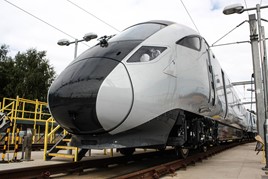 Testing of the first TransPennine Express Class 802 is underway on the East Coast Main Line.


Nineteen ‘802/2s’ are on order from Hitachi, with Angel Trains funding the sets. The first pre-series trains are built in Kasado, Japan, with others built in Pistoia, Italy.

The manufacturer said testing will span along the entire route in due course. When in traffic, the TPE ‘802/2s’ will run between Liverpool Lime Street/Manchester Airport and Newcastle/Edinburgh Waverley.

The new trains will provide 161 additional seats compared to the existing Class 185s used on the route. This will be the first time TPE will operate passenger trains on the ECML north of Newcastle.

The trains, will be able to run in either five or ten carriage formation, capable of speeds of up to 140mph in electric mode and 125 mph using diesel engines.

Transport for the North Chief Executive Barry White said: “The extra capacity these trains offer is much needed and the fact they are future-proofed with the latest technologies is further evidence of long-term thinking for a brighter future.”

Hitachi Rail Europe Projects Director Berry Sas said: “Our modern intercity trains will be calling at all stations along the route ahead of carrying passengers next year. Passengers will instantly recognise our high-tech trains, sporting an aerodynamic design first pioneered in Japan”.