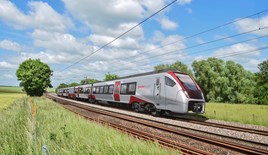 The company told RAIL: "“The majority of the tests will be done in parallel at Velim (Czech Republic) and Romania, as well as in Switzerland and UK. There will be some testing in Germany, too. Various units will be involved for testing at the same time.”

The designs for the Stadler electric multiple unit and bi-mode fleets have been ‘locked’, and construction will start soon in Switzerland. Work continues to finalise designs for the Bombardier Aventra fleet that will operate suburban trains, and these will be the first to enter service. GA expects the design to be ‘locked’ in November.

Some 169 new trains are on order, in a £1.4 billion investment that will entail delivery of 1,043 new carriages, replacing the entire existing GA fleet.