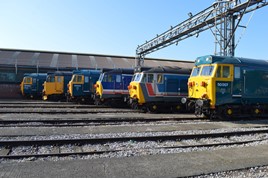 Four visiting Class 50s have been confirmed the Golden Jubilee event for the class at the Severn Valley Railway on October 4-6.

That takes the planned number that will be action to ten, with the possibility of one or two more locomotives to be added to the line-up.

Confirmed visiting locomotives will be Garcia Hanson’s 50008 Thunderer, Paul Spracklen’s 50026 Indomitable and Neil Boden’s 50017 Royal Oak and 50050 Fearless (the first-built ‘50’) will all haul trains at the event (50026’s appearance depends upon completion of engine repairs).

“We’re currently working hard to get 50044 ready, and are making great progress on the return to traffic of 50033, which we’ve taken on a three-year loan from Tyseley Railway Museum.

“To have ten Class 50s at the one event will be a great achievement and something we doubt will be repeated. We’re still in discussions to see if one or more other locomotives could attend, and finalising the programme for the three days.”