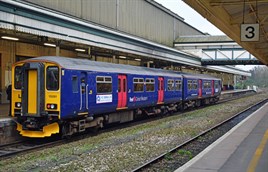 First Great Western named 150261 on November 27, to mark the 25th anniversary of the launch of the project that transformed the Barnstaple-Exeter line.
The diesel multiple unit was named The Tarka Line, the first 25 years 1989 – 2014 at Barnstaple station at 1035, prior to a meeting of the Tarka Line Forum. The forum began life as the Exeter – Barnstaple Line Working Party at the beginning of the line development project and has met regularly ever since.
As part of the project, the working group came up with a brand name for the local railway service and the “Tarka Line” was born, launched at Barnstaple station in October 1989.