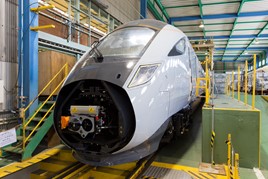 The first two of 19 Class 802/2s for TransPennine Express will arrive in the UK for testing in the summer.

Hitachi confirmed the plan on December 19, when it released the first images of the ‘802s’ at Kasado (Japan), where they are being built.

TPE has 19 five-car ‘802/2s’ on order, funded by Angel Trains. They will enter service from December 2019, running between Manchester/Liverpool and Leeds/York/Newcastle and Edinburgh via the East Coast Main Line. The first two sets will be 802201 and 802202.