Speculation increases over use of HSTs 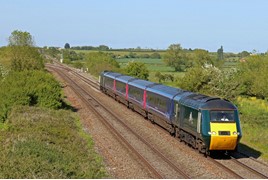 The potential use of short-formed High Speed Trains by operators other than Great Western Railway is “commercially sensitive”, according to Angel Trains.

GWR and ScotRail are both introducing modified four and five-coach HSTs on various duties, with GWR’s operating regional services and ScotRail’s Inter7City sets to be used on its core inter-city routes.

GWR Laira Depot Manager Colin Page told RAIL at the end of April that he believed there could be a use for more of the trains, either with GWR or with other operators (RAIL 878).

But when contacted by RAIL, Angel Trains, which owns the IC7 fleet and some of the GWR ‘Castle’ sets, declined to comment specifically on Page’s suggestions.

The rolling stock company owns the Mk 3s and Class 43 power cars stored at Ely, as well as 93 Mk 3s and 23 power cars that are due off-lease from LNER by the end of the year.

The Department for Transport has said that some ‘high-quality’ ex-LNER HSTs could be transferred to the new East Midlands Railway franchise won by Abellio (RAIL 877), although this would be a short-term option until new bi-mode trains were introduced from April 2022.