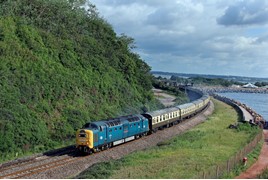 The purchase of two preserved Class 55 Deltic locomotives has changed the thinking at Icons of Steam, in terms of future operations.

When Class 37s and ‘47s’ were bought from Direct Rail Services, the company’s initial plan was for diesel units to merely support the steam-hauled charters, and not operate railtours in their own right. That may change, following the acquisition of D9016 Gordon Highlander and pioneer 55022 Royal Scots Grey.

The future of the two Deltics is now secure, following their sale by Martin Walker to join the growing fleet of diesel locomotives under the ownership of Locomotive Diesels Ltd, a subsidiary company of Jeremy Hosking’s Locomotive Services Ltd (LSL).

Walker had been seeking expressions of interest in the two locomotives (RAIL 838). The agreement to purchase both ‘55s’ includes a large quantity of spare parts, components and consumables.

LSL spokesman Peter Greenwood told RAIL: “The reason for the purchase of the ‘47s’ and indeed the ‘37s’ was very much in support of our steam fleet. That is not to say that we have ruled out any possibility of diesel-operated railtours, just that this did not form part of our thinking at the time of acquisition.

“Obviously the purchase of the two ‘55s’ does rather change things. And while it is clear that such locomotives deserve better than purely ‘support’ roles, it is much too early for them to be featuring in our plans for main line operations.”