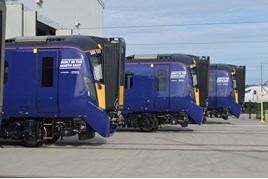 ScotRail has released images of the interior fitted to Hitachi Rail Europe Class 385 electric multiple units that will be introduced from next Spring.

Seven-car trains will introduced initially on the Edinburgh-Glasgow via Falkirk High route (one three-car ‘385/0’ and a four-car ‘385/1’) before eight-car sets are introduced later. When pairs of ‘385/1s’ are operating, capacity is increased 44% compared with Class 170s currently used.

ScotRail Alliance Managing Director Alex Hynes said: “The finish of these trains will significantly improve the experience of customers travelling with us. Their design has resulted in bright, spacious and accessible carriages – perfect for commuters, business customers and leisure travellers alike.”

Mitsuo Iwasaki, Head of Technical at Hitachi Rail Europe, said: “We’ve worked closely with ScotRail and various passenger groups to include their ideas into the design and the result is a visible improvement for people travelling.”