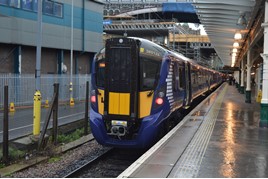 Almost half of ScotRail’s Class 385 electric multiple units are now north of the border, after four-car 385116 was delivered to Craigentinny on December 14.

That makes 33 EMUs now in Scotland, from an order of 70. To meet SR’s new December timetable plans, 31 of the Hitachi sets needed to be available.

A Hitachi spokesman told RAIL that the four Class 385s in Italy are having interiors installed at the facility, as well as post-production work. They had been used for network compatibility testing and type testing, with 385001 and 385102 used in Scotland, while 385002 and 385101 underwent tests in Velim (Czech Republic) and Germany.

Two of the EMUs will return to the UK at the start of February, while the other two will arrive in March. They will be the last to enter traffic.