Rate of HST withdrawal to increase in December 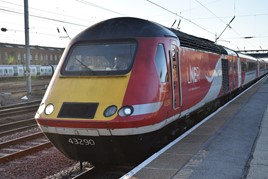 The number of withdrawn High Speed Trains will rise rapidly in December, as Great Western Railway and LNER remove sets from traffic.

They are likely to join sets already stored at various locations such as Ely Potters Group and Long Marston.

Porterbrook has already confirmed plans to scrap HSTs. Angel Trains is still looking for potential uses for the vehicles, some of which have been stored for almost a year.

43018 is at Haymarket for component recovery, while 43195 is at Laira for the same purpose having been damaged in an accident at Plymouth on January 1 2018. Ownership has transferred to FirstGroup.

Two power cars (East Midlands Railway 43048/089) will be donated to the 125Group once they are retired from the main line. They will join 43002 Sir Kenneth Grange in preservation, with the latter now part of the National Collection at York.