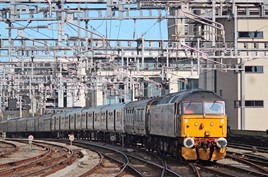 Rail Operations Group will soon use a Class 47 to haul multiple units without the need for translators, following modifications carried out to the first of its four locomotives.

Previously, the company has only been able to use its fleet of modified Class 37s or Class 57/3s sub-leased from Direct Rail Services, as both these fleets are fitted with Dellner couplings that can be used to haul brand new electric multiple units as well as off-lease trains.

47812 is the first of the four operational ‘47s’ in the company’s fleet to be treated. It has been modified at Arlington Fleet Services’ Eastleigh Works as part of a major overhaul. ROG is putting all its ‘47s’ through this work.

Speaking to RAIL on March 20, Rail Operations (UK) Ltd Managing Director Karl Watts said the equipment fitted was not as powerful as that designed by ROG, but that this would not affect how the company plans to use the ‘47s’.

“There’s no specified target for them to be used - they are to supplement the ‘37s’. It adds robustness,” he said.