Peak-time use for Crossrail's new trains 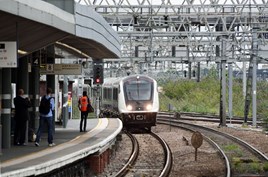 More than two months after the first ‘345’ carried passengers, TfL Rail has started using Aventras on peak-time trains between London Liverpool Street and Shenfield. The new EMUs had previously been restricted to an additional rostered duty in the morning on the Metro route to Shenfield.

“Following the introduction of the first new Class 345 trains in June, peak services began running between Liverpool Street and Shenfield at the end of August,” said Howard Smith, Operations Director for TfL Rail.

“Feedback from passengers so far has been positive with more trains due to be introduced over the coming months. By the autumn, there will be 11 trains running on the TfL Rail route.”
Regarding the Class 315s, which date from 1981-82, Smith said: “The first of the older trains will gradually be removed from passenger service from late 2017. However, some of these trains will still be operating until 2019, when trains from Shenfield are able to run directly to Paddington through the central tunnels.”

TfL Rail leases 315818-315861 from Eversholt Rail. All have undergone refurbishment, including modifications to make them compliant with accessibility laws required for trains to remain in traffic beyond December 31 2019.

They usually run in pairs, and have been used on the route since their introduction. Their future remains uncertain - one possible home had been the Welsh Valleys, although uncertainty regarding electrification has seemingly put paid to that.

Almost seven miles of the new West Midlands Metro extension from Dudley to Brierley Hill risks being postponed, or even cancelled.