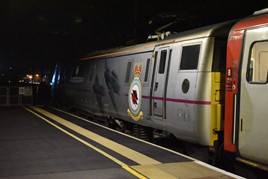 LNER has replaced the vast majority of its Class 91/Mk 4 fleet with Hitachi Class 800/801 Azumas, and is restricting the older traction to London-York/Leeds/Skipton and Bradford routes. This helps with traction knowledge.

The operator revealed last year that it was in the market for additional trains to support the Azumas, and that having planned to dispense with all 31 Class 91s and 302 Mk 4s by June 2020, it is instead retaining 12 locomotives and seven rakes of coaches, plus two spares (65 coaches).

The Mk 4 fleet will also undergo overhauls on bogies, couplers and doors, as well as an interior saloon and vestibule exam. The work should be complete in January 2022.

Class 91s and Mk 4s had been ordered to operate express services on the East Coast Main Line following its electrification. They entered traffic between 1988 and 1992.