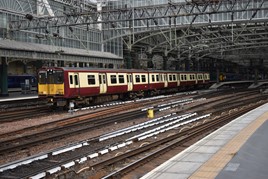 The arrival of new trains means the end of the line for some fleets, while others will be cascaded.

North of the border, the introduction of Hitachi Class 385 electric multiple units has enabled ScotRail to start withdrawing Class 314s (five have been scrapped). All of the veteran EMUs, first introduced in 1979, will be out of traffic by the end of the year.

At Great Northern, new Siemens Class 717s have allowed the withdrawal of three-car Class 313s that were introduced in 1976-77 (23 have so far been scrapped).

Northern has finally been able to withdraw its first Pacers, following the introduction of its CAF fleet. However, while seven have been retired, the operator has admitted it will need to keep Class 144s in service in south Yorkshire for a period at the start of next year (RAIL 883).

Neighbouring operator TransPennine Express has handed the first of ten Class 350/4 EMUs back to West Midlands Trains, with nine to follow by November.

TPE is also due to start handing Class 185 DMUs back to their owner this year, once new fleets enter traffic across the Pennines.

On LNER, the first Class 91 has been withdrawn, while five rakes of Mk 4s have been sent off-lease, with one Trailer Standard (TSO) sent for scrap already. Except for 12 coaches confirmed for Transport for Wales, the future of the Mk 4 fleet (1989-92) remains bleak.