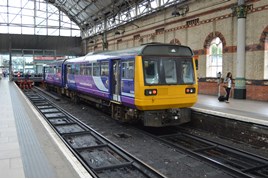 The first Pacers will be sent off-lease from Northern on September 15 2018, with the final trains released on October 12 2019.

In the franchise competition eventually won by Arriva, the Government had announced that the Class 14x fleet in use by Northern would have to be withdrawn, with the disabled access deadline of January 1 2020 acting as the catalyst.

The withdrawal dates were revealed when the Department for Transport released the Northern franchise agreement on March 1. First to be released will be five two-car Class 144s owned by Porterbrook. The final two-car ‘144s’ will be withdrawn on January 5 2019, while the ten three-car ‘144s’ (144014-144023) will be released on March 31 2019.