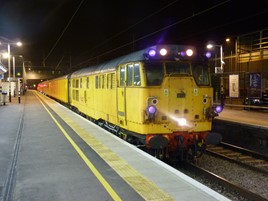 The last two Network Rail-owned Class 31s are for sale.

The locomotives are stored at Derby Railway Technical Centre. 31105 was withdrawn from main line duties in October 2014, but was used as a yard shunter and has had various exams, while 31233 was withdrawn in April 2017.

NR states that while 31105’s wheelsets themselves (axles/wheels) are ok, its tyres are below turning size and would need replacing if the locomotoive was to be used on the main line. On Train Monitoring and Train Protection Warning System fitted to the locomotive will be sold with it, but the GSM-R equipment will be removed.

For 31233, NR says its wheelsets are worn but serviceable. It too will be sold with its OTMR and TPWS, but NR said it will also sell the GSM-R equipment still fitted to it.