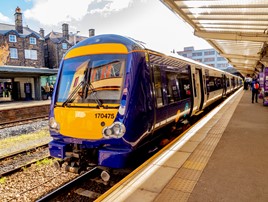 Northern 170475 became the 100th refurbished train in traffic with the operator when it entered service on October 29. The three-car ex-ScotRail diesel multiple unit entered traffic on the Harrogate Loop.

Northern has a fleet of 243 trains, all of which are being refurbished to the ‘digital’ standard as 158845.

Northern Engineering Director Ben Ackroyd said: “The refurbishment of our fleet is an ongoing programme. Ultimately, our customers will be travelling on trains which are not only cosmetically better, but will also all feature free WiFi, at-seat power, high-definition CCTV, and customer information media screens.”

Andrew Jones, MP for Harrogate and Knaresborough, said: “The quality of the rolling stock on our line is raised with me more than any other rail issue. People have really noticed the old Pacer trains are being phased out and replaced by much better ones, with the last old Pacer going in just over 12 months.”