No decision yet on future use of East Midlands Railway HSTs 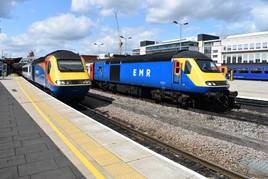 A firm decision has yet to be made regarding the use of High Speed Trains from the end of the year on the Midland Main Line.

Initially they were due to be withdrawn by the end of 2019, having been replaced by electric multiple units on the MML when it was electrified to Nottingham and Sheffield.

When former Secretary of State for Transport Chris Grayling cancelled the scheme north of Kettering in July 2017, he announced a fleet of bi-mode trains would be in traffic from 2022. But no mention was made of an interim fleet, nor were any plans regarding derogation announced.

In April, the DfT told RAIL that one option could be to transfer ‘high-quality’ HSTs from LNER to the East Midlands once they had been withdrawn from the East Coast Main Line following the introduction of Azumas.