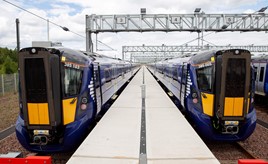 This is the second route the Hitachi-built electric multiple units are being used on by ScotRail after they were successfully introduced onto the Edinburgh-Glasgow via Falkirk High route in late-July (RAIL 858).

A further two three-car sets were put into traffic for the North Berwick trains (385006 and 385007). They are operating services as a six-car formation, and ScotRail says they will be used on up to 15 trains per weekday and 12 on a Saturday. More sets will be introduced this year on the

“This is all part of an ongoing Scottish Government commitment to ensuring Scotland’s railways are a popular choice and demonstrates the real benefits of our extensive programme of electrification,” said Transport Scotland Director of Rail Bill Reeve.