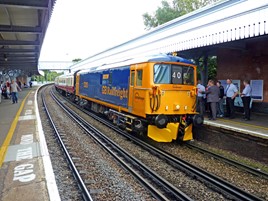 The future of unrebuilt Class 73s owned by GB Railfreight hinges on the successful outcome of negotiations with Network Rail.

GBRf owns 14 locomotives (including three already rebuilt) that are usually employed on Railhead Treatment Trains and Snow and Ice Treatment Trains from October until March, and which spend the rest of the year stabled at Tonbridge.

The operator has proposed rebuilding these locomotives as per its 11 re-engined Class 73/9s, which are fitted with 1,600hp MTU engines as opposed to the 600hp English Electric engines fitted when new. This will enable GBRf to offer further flexibility within contracts it operates with NR.

Currently, the operator supplies locomotives for infrastructure trains and test trains. This will continue until the end of Control Period 5 (March 31 2019). New deals for CP6, which begins on April 1 2019, will then determine the future for the ‘73s’.

However, the cost of rebuilding the locomotives relies on contracts being won - if no work is secured the locomotives, which date from 1965-66, will be disposed of and likely scrapped.

RAIL sources suggest the deals need to be in place to enable rebuilding work to begin this year.