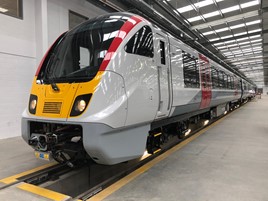 Three vehicles from sets 720501 and 720502 were displayed, as testing of the vehicles begins on site.

Testing on the main line begins next spring, ahead of their introduction next autumn. They will be used on suburban services from London Liverpool Street, as well as running to Southend, Clacton, Ipswich, Norwich, Cambridge and King’s Lynn.

On the ten-car sets (720101-720122) there will be 1,046 Standard Class seatsm including 107 tip-up seats and six wheelchair tip-up seats. There will be one universal access toilet and two standard toilets.

Alan Fravolini, Bombardier portfolio director for Aventra projects, said: “The first set begins testing in the autumn, and the end of the programme is summer 2020.”