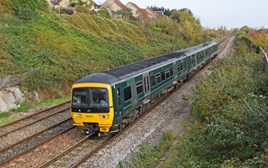 Class 166 Turbos were introduced on longer trains in the Bristol area on October 25, as Great Western Railway increases capacity.

Trains between Bristol Parkway and Weston-super-Mare now use the three-car diesel multiple units, replacing Class 150s. This provides 80% more seats per day between the stations, according to GWR. The ‘166s’ also have air-conditioning, WiFi and universally accessible toilets.

GWR Managing Director Mark Hopwood said: “We know that our suburban Bristol services are some of our most in demand, and I am delighted to see even more of the improvements we promised coming into place.”

More ‘166s’ are expected to be introduced in the region soon, running between Cardiff Central and Taunton.

Elfan Ap Rees, Deputy Leader at North Somerset Council with responsibility for transport issues, said: “The train service between Weston-super-Mare and Bristol is an important commuter link between the two centres, and this improvement in rolling stock is to be welcomed. With the increasing pressures on our road network, the train service is becoming a far more cost-effective and time-saving solution.”