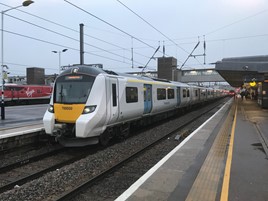 The first service was the 0410 Peterborough-London King’s Cross, formed of 700052. This electric multiple unit was also the first ‘700’ to reach Cambridge in passenger duty, running as the 0604 King’s Cross to Cambridge and 0756 return.

February 19 was the first day in traffic for 700050/052, while the others had operated on Thameslink trains.