More Class 387s as GWR steps up electrics to Didcot 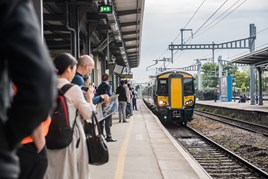 Great Western Railway’s fleet of four-car Class 387 electric trains will increase to 88 vehicles (22 trains) in early July, as the train operator implements the latest phase of its suburban improvements by boosting Paddington-Maidenhead services.

Electric services to Maidenhead started in May with a fleet of 56 EMU vehicles (14 trains). This is set to increase to 180 (45 trains) from December, in preparation for January 3’s introduction of electric trains through Reading to Didcot.

Over the same period, GWR will reduce its fleet of Turbo diesel units from 142 vehicles last May to 97 in December, while its total fleet available for Thames Valley services rises from 198 vehicles to 277.